Stats More…. Christine Chipo is now friends with Jay Moyo. Christine Chipo wants to read. Want to Read saving…. Want to Read Currently Reading Read. Error rating book. Refresh and try again. Out of Africa by Isak Dinesen. Christine Chipo is now following Wizzy Bango 's reviews. Indeed, his meetings in the rural areas spoke on the hotly disputed issues during those days, including but not limited to: cattle destocking, policies limiting arable land among other colonial oppression, expropriation and unjust policies. In addition, after the founding of the first effective nationalist party, the Southern Rhodesia African National Congress SR ANC in , the participation in politics by civilians in Buhera District became widespread.

The party was introduced in Buhera District by Masotsha Ndlovu, a famous pioneer trade unionist and political activist who was originally from Thekwane area in Matabeleland. These were Masotsha Ndlovu, chairman of the local branch, Christopher Mutandwa, vice chairman and Mandiparara Kamunga, secretary. Besides the use of the different tactics the RSF employed that are discussed below, those who supported the RSF appear to have been motivated by the general benefits they were getting from the Smith regime.

In this regard, the people of the Gwebu area are a case in point. The Gwebu people were forced to relocate to Buhera from Fort Rixon, where they were allocated the well-watered lands of the northwestern part of Buhera District. This was also revealed in the Buhera Land Development Officers: Monthly Reports for — which point out that out of the eight master farmers farming in the reserve, only two from the Gwebu area were successful in despite the severe drought.

Like Chief Gwebu, Chief Makiwa Nyashanu also supported the administration but unlike the former, the latter was opposed by some of his own people because of his forceful character. He cooperated with the Rhodesian administration and allocation of land in his area also went on smoothly. In this regard, the appointment of Makiwa Nyashanu as Chief was attributed to manipulation by the Smith regime in expectation of the benefits it was to get from him. This point was disregarded because Gona died before he was inaugurated. However, he later on abandoned the Smith regime for the guerrillas thus becoming a controversial figure.

Given these intricacies, it is beyond doubt that those traditional leaders who supported the RSF when the war began in the district were motivated, to a significant degree, by their self-interests, especially the benefits they obtained from the colonial system. They supported the RSF in an effort to safeguard their sources of livelihood. While traditional leaders either supported or betrayed the liberation struggle, others were double-faced in a drive to survive the ruthless responses of the contending forces.

This section shows that the traditional leaders including Chiefs took part in the mobilisation and organisation of the civilians, guided guerrillas during the war, ensured the provision of material, financial and moral support and supplied information about the plans and movement of the RSF.

On the contrary, some Chiefs collaborated with the RSF against guerrilla operations, whereas others were double-faced thus they responded to the needs of the fighting forces. As a result, this study does not aim to settle the issue of those who argue that voluntary cooperation and coercion were the means through which rural people supported the guerrillas but to point out that the question is difficult to answer than assumed by the earlier scholars.

In Buhera District, ZANLA pursued its Maoist strategy of respecting the culture of the people and reaching them through those they trusted, mostly Chiefs and spirit mediums. These had begun operations without educating and involving the local population who often informed the police and army of the presence of the guerrillas. The current fighting … ushers in a new advanced stage of armed struggle … following in tactics and execution, the long-established ZANU strategy of fighting from secure areas established in the countryside after thorough and extensive political mobilisation of the masses … these areas have grown so strong and secure that they have become indestructible [ sic ].

We have no need for external bases. In this light, the guerrillas first approached the traditional leaders of Buhera in early February as soon as they deployed in the area.


Importantly, the war did not engulf the whole district at once, instead it was experienced in the Nyashanu area before spreading to the northern and western parts of the district. It was situated behind a mountain Chimumvuri where the guerrillas could easily obtain cover in the event of an enemy attack. The people and their traditional leaders were conscientised and convinced not to report the guerrillas whose mission was to liberate black Zimbabweans from colonial domination.

The committees were announced after the guerrillas were convinced and confident that the people and their leaders were not sell-outs supported the liberation struggle. Fidelis Mutsakani said the pungwes were a success as a result of the cooperation of traditional leaders who encouraged their people to attend and to desist from reporting guerrilla presence to the enemy. It was at pungwes that the support committees were organised and in most cases kraal heads became chairpersons of the support committees that were formed to provide food and other wartime needs. For example, Muye Mavhimira, a head of Mujakachi village in Nerutanga was appointed chairperson of one of the support committees of the liberation struggle.

The issue of appointing village heads as chairpersons of the support committees varied from one area to the other and this was also the case in Mtoko District.

More so, the inclusion of traditional religious leaders in the mobilisation process was crucial in Buhera District and the guerrillas ascertained their involvement before they stayed long in an area. The peasantry constituted more than seventy percent of the black population during the liberation war hence were a critical constituency in the attainment of victory by the guerrillas.

In this regard, it refers to Chief Gwebu, in particular. On the other hand, it is also used to refer to those traditional leaders who supported, worked together and cooperated with the guerrillas. This clarification is necessary because after the liberation war the term war collaborator became largely associated with the positive as opposed to the negative meanings such as betrayal and selling out to the enemy.

As a result, some of the traditional leaders in Buhera District were controversial during the liberation struggle. 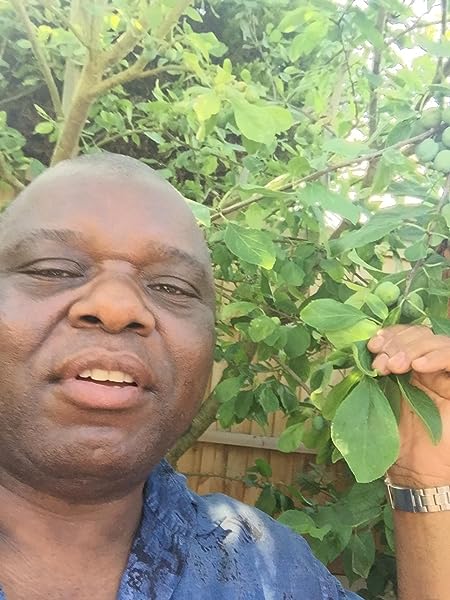 Of the seven Chiefs, only Makiwa Nyashanu openly collaborated with the guerrillas. His opposite equivalent was Chief Fish Gwebu who fits the stereotype of a colonial chief in all respects. The other five Chiefs, Makumbe, Chitsunge, Chimombe, Chamutsa and Nerutanga did not openly support or oppose the guerrillas. Chief Gwebu collaborated with the RSF for several reasons some of which have been discussed above. Moreover, since the African Council of Chiefs was formed in he was one of its members and was attending all its meetings and respecting its deliberations.

This forced him to cooperate with the colonial administration in return for several privileges.

In light of the above, Gwebu was pro-government and enjoyed the support of the state. This was quite opposed to the nationalist delicate feelings. The Chief also prohibited meetings of nationalists in his area in the mids. People of the Gwebu area did not want the war because they saw in it a reversal of everything they had gained in the district. Gwebu was referred to by his people as Baba meaning Father because of his good leadership. The soils meant a lot. The people compared their past lives in Fort Rixon, other areas in Buhera District and saw themselves as number one as far as farming and standards of living were concerned.

Against this backdrop, Gwebu and a reasonable number of his people supported the RSF against the guerrillas. On the other hand, Chief Makiwa Nyashanu, unlike Gwebu, rather became opposed to the colonial administration.

In addition, when the war started he opposed the establishment of protected villages PV s in his area. He dumped it when he saw fit. This demonstrates the degree to which the traditional leadership institutions were flexible and able to negotiate the choppy waters of intermediary during the colonial period and liberation war. Elsewhere in the country, there was Munhuwepayi Mangwende and Rekayi Tangwena who were well publicised in the local and international press, 96 Chief Sigombi in Matabeleland and Chief Shumba in the Victoria province—all were deposed for resisting colonialism. The trouble had begun when the greying chief defied and resisted moves by the government to establish PV s in his area during the war.

He told the authorities that he could not stand the idea of his people being cooped up and confined in a fenced area like animals. Instead he suggested they erect a fence all around the area under his jurisdiction. In this regard, despite the eulogizing language used and the time the article was written which does not exonerate it from nationalistic bias motivated by the independence euphoria of the newly independent state of Zimbabwe, Nyashanu represents a classic example of a Chief who collaborated and supported the guerrillas staying with his people.

The concept of PV s was introduced in rural Rhodesia, similar to other parts of Africa such as Kenya in the s, when the liberation struggle intensified in the s. According to Feichtinger, the British forces in Kenya restricted over one million Kenyans into concentration camps in an effort to separate them from the insurgents. It was also meant to win the support of the people and destroy their support for the guerrillas. The RSF introduced guarded PV s as a way of designating the rural areas no-go places for guerrillas through evacuating, screening and resettling most of the rural people in other areas that were easy to control. 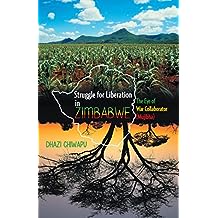 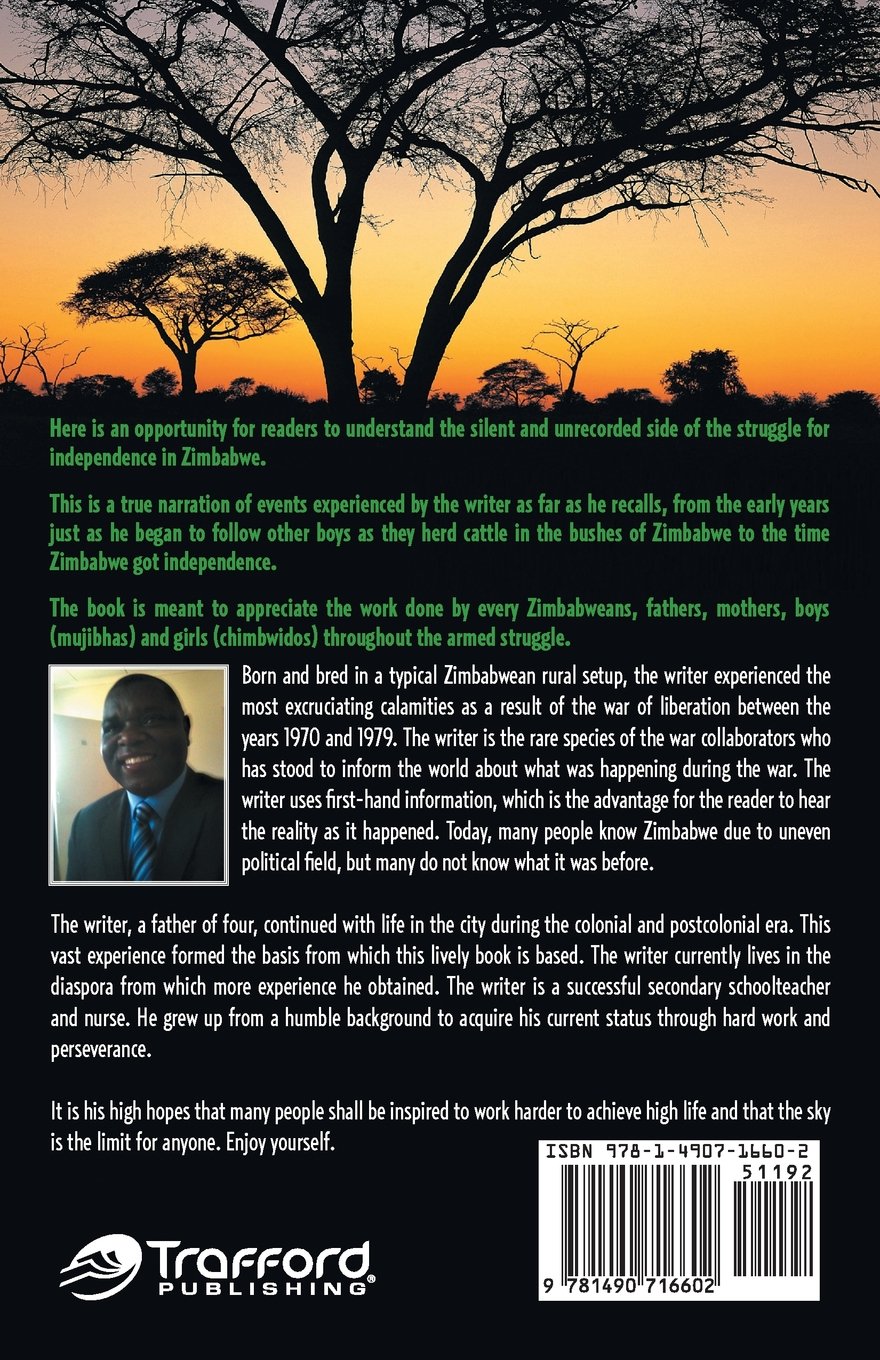 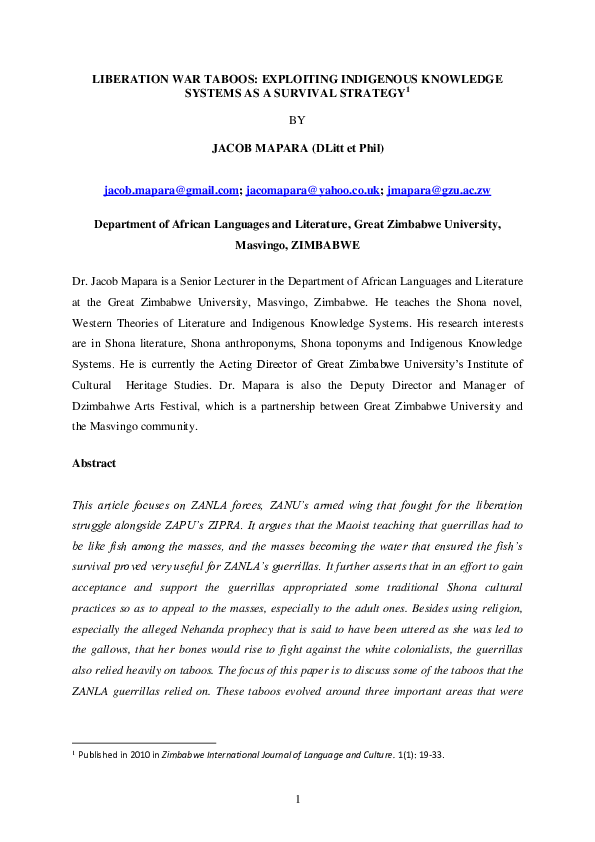 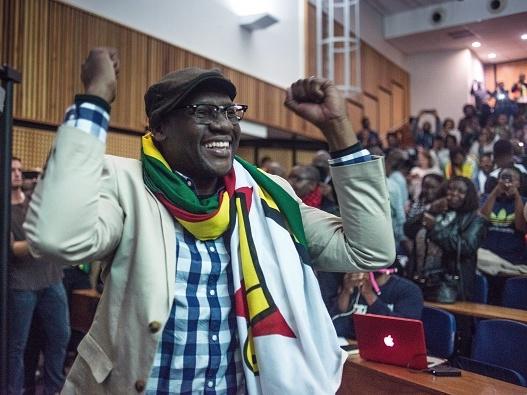 Related Struggle for Liberation in ZIMBABWE: The Eye of War Collaborator (Mujibha)